Joining the list of controversial buzzwords, “Genetically Modified Organisms” (GMOs) also known as transgenic crops, are becoming one of America’s most popular food concerns. Though first introduced in the mid 90’s, it’s taken the general public some time to understand that GMOs are not the be-all and end-all we once thought. As quality and source of food becomes more of a priority to Americans, we are becoming more hesitant about automatically trusting what food manufacturers deem as “healthy” and instead choosing to be more involved in the research process. Most scientists admit GMOs are considered “safe”, but will also concede that these crops may pose unforeseen risks. This is simply because of the lack of research on their effects on human health. Most people have adopted an opinion that GMOs are “bad,” but may be unsure of why that is, their effects on the body and the quantity they are still consuming. Question is, is it necessary to be 100% free of them?

According to the Institute for Responsible Technology, “a GMO is the result of a laboratory process where genes from the DNA of one species are extracted and artificially forced into the genes of an unrelated plant or animal. The foreign genes may come from bacteria, viruses, insects, animals or even humans.” Essentially, people in a lab somewhere are using these techniques to create desirable traits that do not naturally occur within that species. This is not exactly a new development.

For hundreds of years, people have been crossbreeding plants and animals to produce favorable traits. In the past though, it was done within the same species and did not involve the participation of herbicides and pesticides. Today we are capable of not only of crossbreeding, but allowing different species to share the same genetic material.

The Office of Science at the U.S. Department of Energy posits the main benefits of GM food as improved taste, increased nutrients, resistance to disease & pests, and the ability to grow more food on less land. Of these aforementioned benefits, the ability to grow more on less land has appeared the largest accomplishment of transgenic crops. This is not only because they have the ability to yield more, but also because they can tolerate herbicides and produce their own pesticides. It all sounds good in theory, but what does this process do to our bodies and the land long-term?

Implications of GMOs on Health

A few Cliff Notes on GMOs and health: There have been no studies tracking the long-term effects transgenic food might have on humans. Studies so far have been questionable at best. The FDA treats GMOs like they would any conventionally grown crop; which means no additional safety screening required even though they are produced in a wildly different manner. Food manufacturers would want the buck to stop with them, but assigning the responsibility of our health on companies where it directly conflicts with their financial livelihood is counterintuitive.

Studies are demonstrating that glyphosate-based herbicides such as Roundup® (commonly used in GM food) appear to suppress the growth of beneficial gut bacteria and promote overgrowth of pathogenic bacteria. This is occurring in our food, bodies and in our livestock commonly fed GMOs.

Due to the newfound relationship between GMOs and overgrowth of pathogenic bacteria, it is hypothesized that GM agriculture may be contributing to the epidemic of infectious diseases that are resistant to antibiotics.The Center for Food Safety recognizes that increased toxicants, allergic reactions, antibiotic resistance and immune-suppression are all likely results of GMOs but again have no long-term research to conclude causation. 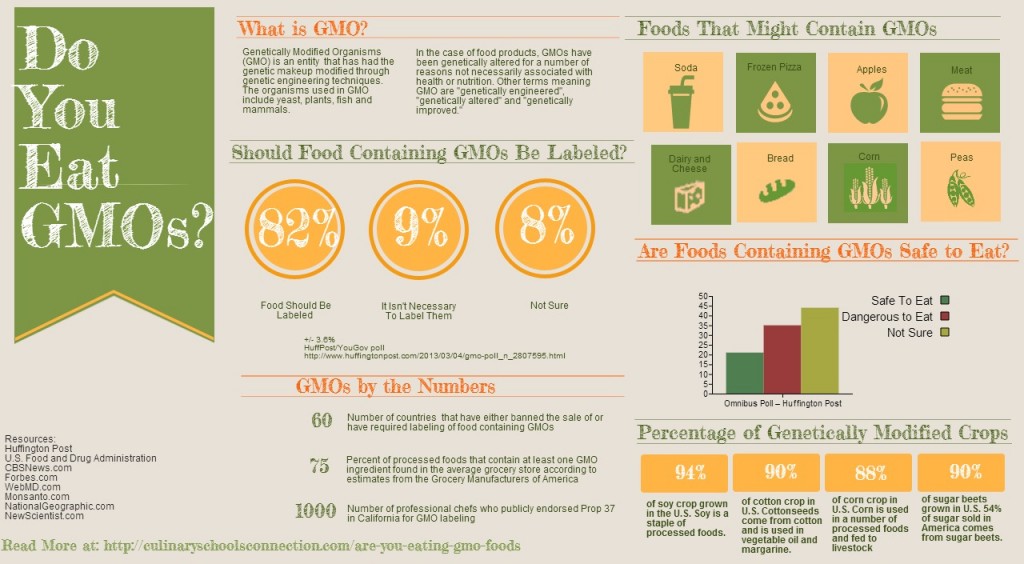 With what we know about transgenic crops’ effects on us, it is human nature to want to avoid them. Currently, the FDA has no requirements for labeling genetically engineered food in ingredients lists. Even though the majority of America (see info graphic above) would love to see them labeled, it does not appear it will be a mandate for some time. Unfortunately for us, they are present in nearly 80% of our packaged foods. Unless a person is completely devoted to buying strictly “USDA Organic” or “Non-GMO Project Certified”, growing their own food, or researching the source of everything they eat, it becomes nearly impossible remove them from your diet completely. Dedicating that kind of time and energy into food is not feasible for most people.

Avoid Purchasing Foods with These Ingredients:

According to Non-GMO Project, these ingredients are most commonly derived from GMOs. Most often, you will find them in heavily processed foods. If that still is too daunting, avoid well-known transgenic crops.

Look Out for These Crops in Particular:

It’s important to remember that when avoiding these crops, we should not just be cautious about their primary harvests, but also their by-products. Items such as sweet corn, tortillas, corn oil, corn chips, tofu, edamame, soy milk, and baby formula are often laden with genetically engineered food. If you wanted to get really crazy, look for wild-caught fish, and USDA Organic and Non-GMO Project verified meat & dairy.

Other Easy Changes to Implement Today:

According to the USDA, certified organic products cannot intentionally include any GMO ingredients. Non-GMO Project Certified is likely the best way to go, as their whole mission is to empower consumers to make their own choices about GMOs. Their participants also undergo regular and extensive testing by a third party to ensure companies’ “GMO-free” claims are meaningful.

The stress of trying to discern GMO-laden products from GMO-free products, let alone afford them, is not always worth the health benefits of forgoing them completely. Following the above advice will make a substantial difference in your consumption. With so many of their effects yet to be researched and discovered, it is hard to definitively say they need to be blacklisted from our diets.

Until they are labeled (forcefully or voluntarily), they will be difficult to discern and completely eliminate without constant education. As we the consumers place more prominence on GMO-free food and make our purchase decisions reflect that importance, manufacturers will begin to follow suit.

Many other countries adopt a philosophy of “guilty until proven innocent”. In America, we often give the benefit of the doubt and assert, “innocent until proven guilty”. While this philosophy is usually a good picture of justice for people in the judicial system, it leaves the door open for potential health complications to develop until long-term studies are conducted to determine health effects. While the companies behind the production of GMOs can very well have good intentions, we know this much: consumption of pesticides and herbicides are far from beneficial to anyone.